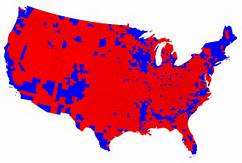 On Tuesday, November 6, 2016, I sat watching as the map turned red.
In a dream-state, I wondered if this was really happening. At 10pm. My son tried to reassure me…”don’t worry…there’s no way Trump will win. He told a ten year old girl that he’d be dating her in 10 years. I’m only 9 years old and I know that’s not right. And I know that someone like that…can’t be President.” As I said goodnight, all that I could say was “hopefully that is going from your 9 year old mouth to God’s ears.”
And yet…the map slowly exposed its true self by turning red, that night.
It is now 7 days later. Over the past week, I went through all of the five stages of grief: denial, anger, bargaining, depression and acceptance.
Denial was the day after. It was the “it can’t be” stage. I combed through all the media, listening out for someone saying that there was a miscount. That didn’t happen.
Anger came on day two. This was the stage, where I was looking at America full in the face…and feeling disgusted by what I was seeing. Obviously the disgust was contagious…because Pro-Trump-ist were defending their actions (a sign of culpability). These white folks were swearing long and hard that although they voted for Trump… they are NOT racist, etc. And the rest of America laughed at the absurdity of someone voting for a bigot, xenophobic, racist and sexist man to represent the nation…if they don’t feel like this man represent their values.
The next two stages merged together. The bargaining- depression stage, was where I found myself realizing that…perhaps America dodged a bullet my electing Trump over Hillary. Perhaps he was/ is the lesser of two evils. Perhaps having an honest anti-everybody-that-isn’t-rich-white-Christian-and-a-male, is better than a Liar and a Thief (yeah, I believe Hillary has a few bones in her closet…and if you don’t believe me…do your research and look it up!).
Finally the last of the stages of grief… Acceptance began to sink in. And I’m about to be honest here…so brace yourself. I realized that no great war has been won without a little bloodshed. At least, not for my people.
I am of African descent. Many of people died for the right to not be considered a product. Many of my people are still able being gunned down in the streets…both by people that look like them and by Officers of the Law that don’t look like them.
I am woman. Many of my people are considered property all across the land. We are the ones that hear footage of the future President’s statements about our bodies and the bodies of our daughters…and we know that America continues to value us as products.
I am a newly practicing Muslim. Many of my people are being killed all over the world just because of what we believe. That for the acts of a few radical Extremists…we are pigeon-held and feared and hated, simultaneously. We are subjected to mass murder and torture by people whom feel self-righteous in their hatemongering.
So yes…I am in the stage of Acceptance. Accepting that we…the American people might have to experience a little discomfort for the next 4 years. That we, might have to sacrifice ourselves for the greater good. You might wonder what could be the greater good. Well I’m not quite sure of all the lessons that will be learned over the reign of Trump, but I can tell you one lesson that I am hoping for.
It seems that America would benefit from learning from a previously made mistake. America has the tendency to elect presidential candidates based off of personal like-ability. George Bush was elected because many Americans thought he was someone they’d have a beer with…perhaps have over to for dinner. Similarly, they feel like Trump’s candidness is “keeping it honest”…like Cousin Somebody…or the “ain’t taking no shyte Uncle.”
Well…as the old adage goes…”you get what you pay for” so when America elects based off envisioning that the President Elect would be a perfect candidate for hanging out in their home (whether that’s a trailer, apartment, farm or mansion)…America will get what it buys.
And personally. I am a fairly smart individual with experience providing leadership to sizey companies. But even at that…I don’t want a President whom is at or near my intellectual level or poise. I don’t want a President that I can have a beer with or reminds me of my outspoken relative. I want someone whom can do something that I, nor none of my friends, nor family members are capable of doing… lead the country.

Written by the Nameless Dozens.