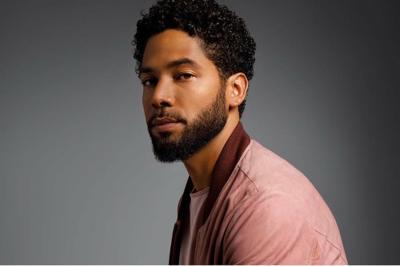 “Empire” actor Jussie Smollett was assaulted in Chicago on Tuesday by two men who hurled racial and homophobic slurs at him and wrapped a noose around his neck in an attack police are investigating as a hate crime, officials said. “TMZ reports that although Smollett attempted to fight back, the men fractured Smollet’s rib.”

I’ve seen really beautiful pictures of @jussiesmollett on my TL today. Everyone who knows him personally has so many good things to say about him and his spirit. I chose this picture because the sadness in his eyes is what bothers me the most. The way that evil can dim someone’s light is scary. I see it here. I see brokenness. I know his exterior wounds will heal without a doubt but my prayer for him is that his light will be ignited even brighter than it was before. I’m sorry this happened to you 😢. And for anyone reading who has been through some shit that dimmed the light in your eyes , I have the same prayer for you as well 💛 #jussiesmollett

Smollett, 36, had just landed in town from New York and was out getting a bite to eat at about 2 a.m. CT (3 a.m. ET) on East North Lower Water Street, in the upscale neighborhood of Streeterville, is when two men attacked him, the actor told police.

Two “unknown offenders approached him and gained his attention by yelling out racial and homophobic slurs towards him,” according to a statement from the Chicago Police Department. “The offenders began to batter the victim with their hands about the face and poured an unknown chemical substance on the victim.”

The chemical is believed to be bleach, according to a source familiar with the investigation.

“Detectives are currently working to gather video, identify potential witnesses and establish an investigative timeline. The victim is fully cooperating.”

Late Tuesday Guglielmi said on Twitter that investigators have canvassed an expanded area around 300 E. North Water St. and were continuing to search for video evidence. “Thus far, no video of the alleged assailants or a vehicle has been discovered but we are continuing to broaden our search,” he said.

We wish Jussie Smollett a speedy recovery and many of his peers. Check out the well wishes below.