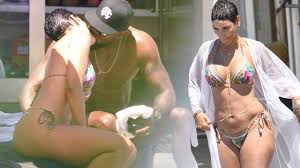 Now this is messy. Director Antoine Fuqua and Nicole Murphy were spotted in Italy canoodling with each other.

The 51-year-old former model and the 52-year-old Training Day  and The Equalizer 2 director were seen making out while hanging out at a hotel pool on Saturday (July 20) in Ischia, Italy.

Nicole and Antoine are in town for the Ischia Global Festival, where he is receiving the Director of the Year Award.

If you aren’t aware, Nicole was married to actor and comedian Eddie Murphy from 1993 until 2006 and they have five kids together.

Antoine and actress Lela Rochon have been married for over 20 years.

Now, there is a chance Rochon and Fuqua separated and they just hadn’t made the announcement publicly, but there is also the chance that Fuqua and Murphy are just straight up committing adultery.

Either way it is not a good look Fuqua and Murphy either of them. A little more tea for you actress LisaRay McCoy alleges this isn’t the first time Murphy has gotten with  someone else’s husband.