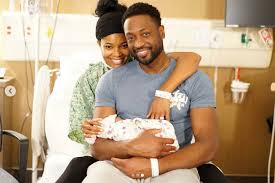 A big congratulations are in order to the Wade family. The happy couple on Thursday announced they’ve welcomed a baby girl into the world. The baby was born via a surrogate on Wednesday. It’s the first child the couple has had together; the NBA guard has three sons and the couple is also raising one of his nephews.

Wade announced the birth on his social media channels, calling her “our miracle baby.” The Wades did not immediately reveal the baby’s name.

Union-Wade has been very open about her struggle to have a child, and previously revealed that she has endured several miscarriages. The couple says Wednesday “will forever be etched in our hearts as the most loveliest of all the lovely days.”